An ongoing study of IRA accounts has consistently found that women, on average, have lower retirement savings balances than men (see chart). Though there may be multiple reasons for this disparity, the most fundamental are the wage gap between men and women and the fact that women are more likely than men to take time off to care for children and other family members.1

The wage gap is narrowing for younger women, and more men are stay-at-home dads. But the imbalance remains.2 Obviously, earning less makes it more difficult to save for retirement. And a mother — or father — who stays at home to take care of the children may not be contributing to a retirement account at all. The same situation could arise later in life if one spouse works while the other takes time off or retires. 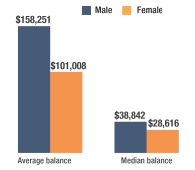 A spousal IRA — funded for a spouse who earns little or no income — offers an opportunity to help keep the retirement savings of both spouses on track. It also offers a larger potential tax deduction than a single IRA. A spousal IRA is not necessarily a separate account — it could be the same IRA that the spouse contributed to while working. Rather, the term refers to IRS rules that allow a married couple to fund separate IRA accounts for each spouse based on the couple’s joint income.

For tax years 2019 and 2020, an individual with earned income from wages or self-employment can contribute up to $6,000 annually to his or her own IRA and up to $6,000 more to a spouse’s IRA — regardless of whether the spouse works or not — as long as the couple’s combined earned income exceeds both contributions and they file a joint tax return. An additional $1,000 catch-up contribution can be made for each spouse who is 50 or older. Contributions for 2019 can be made up to the April 15, 2020, tax filing deadline.

All other IRA eligibility rules must be met. If a spousal contribution to a traditional IRA for 2019 is made for a nonworking spouse, she or he must be under age 70½; the age of the working spouse does not matter for purposes of the spousal IRA. For contributions made in 2020 and later years, the age 70½ restriction has been eliminated by the SECURE Act.

If neither spouse actively participates in an employer-sponsored retirement plan such as a 401(k), contributions to a traditional IRA are fully tax deductible. However, if one or both spouses are active participants, federal income limits may affect the deductibility of contributions.

Withdrawals from traditional IRAs are taxed as ordinary income and may be subject to a 10% federal income tax penalty if withdrawn prior to age 59½, with certain exceptions as outlined by the IRS.